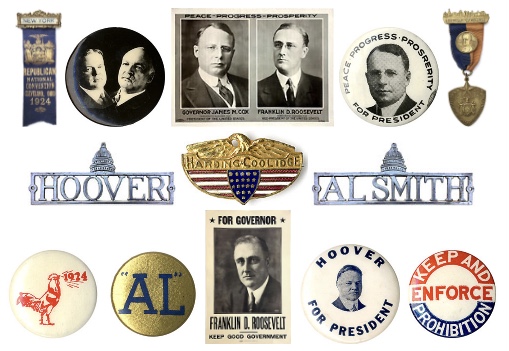 This update features items from the Prohibition era, coinciding with the presidential campaigns of 1920 to 1932. This was a time of both great prosperity and suddenly, great hardship for many Americans. The market crash of '29 and subsequent depression gave impetus to the repeal movement, which tied employment, as well as tax revenue, to legalization of booze.

Highlights include a matched pair of large jugate posters for the Republican and Democratic tickets of 1920, a Smith New York delegation badge from the 1924 DNC, auto attachments from 1928, and a rare Franklin Roosevelt gubernatorial poster from when he won the office held by Smith, who stepped down to run for president. For Roosevelt, this was a stepping stone to the White House in 1932, when he in turn defeated Hoover for reelection and Prohibition came to an end.

Keep safe, drink responsibly, and have a Happy Thanksgiving!